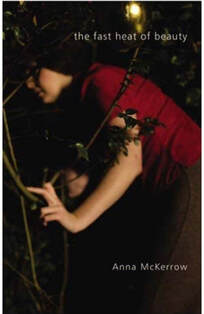 The overpowering heat of beauty is fast wherever we find it: frantic and chaotic in vibration and fixed fast at a particular point, it is the illumination of a moment of truth. Anna McKerrow's passionate, emotional and frequently tongue-in-cheek poems explore such themes as love, pain, healing, spirituality and the mysteries of the everyday, from the daily commute to consumerism. Through her original and distinctive work she questions feminism, the wisdom of a handed-down culture and the gender divide. Her lyricism and humour reveal a refreshing and thought-provoking new female voice in modern poetry. ​ 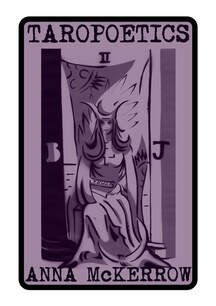 Taropoetics is an investigation of the creation of poetic language utilising the techniques of automatic writing and trance. This was a durational work, lasting a year, which produced a collection of 52 poems, with one written a week between February 2009 and February 2010. Each poem was created as a trance-written response to five tarot cards shuffled and dealt at random. The free-written text was collated over a year and then edited to produce the poems in this book.

For the curious, an index of cards "read" in each poem is given at the end of the book. It is not necessary to understand the given meanings of tarot cards to read this work; merely to understand that the tarot is a series of 78 intensely-imaged pictures that are made to inspire original and creative imaginative and/or intuitive connections. Taropoetics works on the principle that not only are there a vast number of possible combinations of 78 tarot cards that can be the basis of poetic inspiration, but that also, meaning is as dependent on the moment of dealing as the cards themselves; the moment of the psychic state and its bearing on interpretation is as important as the cards themselves.

Taropoetics takes a holistic approach both to the creation of text and the inclusion of the artist within the work. Like Weiner's Clairvoyant Journal, there is a direct connection between the personal and the work. Recognising the tarot as a valid and rich system of signs that can be used to generate an avant-garde text that speaks to prophecy and the individual, personal (postmodern and fractured) "narrative" also seems relevant in today's newly-revived new age culture, which is seeking answers to modern life in ancient traditions. There is also a close relationship between psychic/seer/sibyl and artist/writer/poet that this kind of work reminds us of - both are tasked with decoding the "truth", if it exists, for society and self. ​ 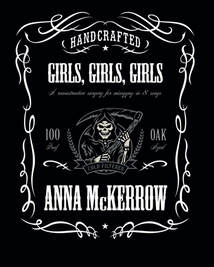 Mötley Crüe’s fourth studio album, Girls, Girls, Girls, was released on my tenth birthday in 1987. It reached number 2 in the US Billboard 200 Chart that year and sold over 4 million copies in the US, and 60,000 in the UK. In it, the band, notorious by that time for their drink-and-drug-fuelled rock n’roll lifestyle, included songs about their drug and stripper-loving lifestyle.
This work seeks to restructure the Girls, Girls, Girls album, not to reveal its inherent misogyny – that should be apparent by listening to the lyrics – but to make something of them.
As a girl child who would grow up to be a Girl in the Mötley Crüe sense of the word, I received their messaging about what a girl was – a passive sexual object to be desired and abused – along with a raft of variously textured misogyny in TV advertising, film, other music, magazines, print media and the attitudes and assumptions of the adults around me. I took in the Girls, Girls, Girls album as a model of what being a Girl was, in my little town in the west country, far away from the Sunset Strip.
I was wrong to do so, of course, but what did I know? I loved metal bands, and thought they were lewd and wild and marvellous. But despite its title, Girls, Girls, Girls was never meant for me: the songs on it, and on most albums in the genre produced and made by men, were made for a male, heterosexual audience. Perhaps no-one – the producers, the marketers, the band themselves – ever thought about their teenage girl fans, unless it was to decide which ones in the crowd they wanted to sleep with at a concert. It was, therefore, a very good thing that the Riot Grrrl movement came along in the 90s, to liberate us girls from male, white, corporate oppression (Sonic Youth, Kool Thing, 1990).
Mötley Crüe were by no means alone in perpetuating misogynist attitudes towards women in the 80s and 90s, and on an individual level, it could be said that they were mostly concerned with getting high and having as much sex as humanly possible – and were not actively pursuing personal misogynist agendas (though, some responsibility does of course have to rest on their shoulders).
More, they were a hugely successful band making ideological content encouraged by the patriarchal structures that contracted them to do so – the commercial music industry, which, like all capitalist, commercial cultural production industries, aims to uphold and regulate the social norms in which it operates, thereby ensuring continued investment in its business.
Girls, Girls, Girls absolutely typifies the apotheosis of misogyny in a variety of ways. First, it looks at women as objects rather than converses with them in a meaningful way. Second, it considers women only as lovers for heterosexual men. Third, it depicts unrealistic, patriarchally-approved female bodies. Fourth, it alludes to sex with underage girls, which is rape. Fifth, in songs like You’re All I Need, desire for women is tied up closely with violence towards them, something I explore against the current narrative of the ‘incel’ movement.
To make the poems in this collection I have used a few different approaches, namely cutup with other sources to provide commentary and comment on the original song lyrics, breaking down the songs to component words and rewriting them, and finding recurrent themes, such as that of geographical locations, and using those words as repeating sets to re-render the original meaning. I have also reflected on lyrics as containing overused clichés, and looked at other clichéd and genred language. 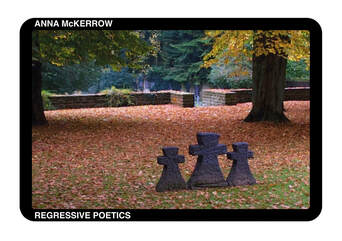 Regressive Poetics is a processual work of poetry that sought to investigate past life memory and mediumship. Past life accounts translated via a digital medium. I liked the idea of an account of something being relayed from another time, and to be able to explore the notion of information being conveyed from “the other side”, ie past lives, or from people that are dead via mediumship. Mediumship always has this kind of inaccuracy about it. You see psychic mediums frowning and straining to get the right message through, and they can describe it as if they are trying to hear something very faint, or garbled. I think people remembering or re-experiencing their past lives is somewhat similar, certainly dreamlike, where things assume a symbolic importance rather than a literal one, or where things are alluded to, or where language is odd or nonsensical, but it has an internal logic within-the-dream. I was reading a book called Swan on a Black Sea which is an account of a series of mediumistic communications from the early 20th century where the medium describes the experience of conveying information as somewhat of a mixed grill – meaning that information, or meaning, is transmitted inefficiently from the spirit world to this one, and as well as that, the information comes through the veil of the medium’s own biases, her take on it. So what emerges is very often a mix of the original message, the distortion and the intermediary’s own effect on the language or the message. ​ 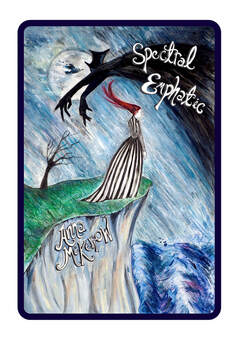 Spectral Emphatic is the sometime journal of an imagined poet and artist collective called The Bohemian Embassy: a small group stamping their obsessive, exhortative writings onto pulpy pages, making short runs of a cult publication. The group features two main characters, Valerie and Veronik, that appear in some of the poems - they are ghostly, liminal, gothic, bohemian heroines that stand on the edge of things, transmitting symbols and dreams to those on low wavelengths.
The collection, then, is concerned with the ghostly and liminal; the gothic and symbolist. It also includes poems inspired by artists who might enjoy membership of the Bohemian Embassy: Christine Aerfeldt, Sarah Moon, Paula Rego: artists who have explored the dark and mysterious places where the mind and spirit stray if unchecked. And those dark and mysterious recesses of the mind are where some of the other poems dally - grief, obsession and madness, unspent psychic forces, as well as addressing familiar mythic figures - the Sphinx, the Sirens, the goddess Medea.
Spectral Emphatic also returns to the theme of divination explored in McKerrow's second book, Taropoetics, but this time via bibliomancy, with 8: A Bibliomantic Poem. This is a long work in three parts made as a result of a processual approach to writing - in this case, a poem that investigates the essence of the energy of the number 8 by a writing-through of text from page 8 from every book on a three-shelf bookcase. The Bohemian Embassy also have a hand in this, using the writer's trancelike state in writing through to transmit some of the mysteries they are concerned with.